Eritrea is in its fifth year of drought. Most of the major water supplies for the capital have been consumed and there are only small amounts remaining for municipal and agricultural use. Who knows how long this water supply will last. Asmara’s most important source of water at the moment is the Toker Dam.

Toker Dam is the largest reservoir in Eritrea to do date. It also may be the only reason that the most populous Eritrean city has not had to promulgate water restrictions. At the time of construction some railed against the project as a lavish project by an ignorant government. Those naysayers have surely been silenced now.

Unfortunately, at this time the reservoir is operating at far below full capacity. The next important project for the City of Asmara should be to build a water treatment plant to recycle the sewage that is created by Asmara. Until then, and until the next rain, the glory of Toker Dam is diminished. 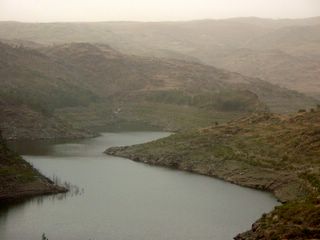 When the Dam was nearly at full capacity it would reach the point at which the treeline can now be seen (look to the rear of the picture). This difference in height is nearly 40 meters according to some sources.