A History of the Flag of Eritrea

Published by Admin on November 10, 2015
Flags represent individual nations (or in multi-ethnic societies “super-nations” that represent the joint identities of more than one nationality) and, as all symbols are, often subject to careful analysis. Eritrea’s flag, to the casual observer, is bursting with the vibrant colors common of many African flags; to one having more than a passing familiarity with Eritrea’s history, the flag is clearly representative of shared national identity and history of the land called Eritrea. 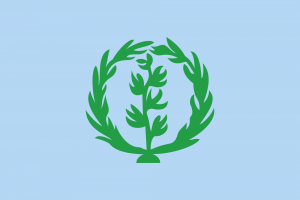 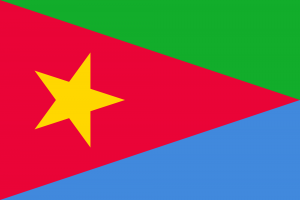 The EPLF Flag represented Eritrea’s second liberation organization, the Eritrean People’s Liberation Front (EPLF). The EPLF, formally created at its First Congress in 1977, resulted from the consolidation of various groups that left the ELF. ((Eritrea by: Edward Denison)) For some time, both the ELF and EPLF were represented in the field and the EPLF needed a new symbol to distinguish itself from the ELF and from the subordination of Ethiopia. The EPLF flag’s distinct design is deep with meaning: the green stands for the fertility of the country; blue stands for the sea; the red for the blood lost in the fight for freedom; and the yellow star has meaning in its shape and color the color represents the mineral resources of Eritrea while the five corners of the star stand for Equality, Unity, Liberty, Justice and Prosperity. ((ref:1)) The EPLF ultimately brought independence to Eritrea but carried both flags throughout the country afterwards. 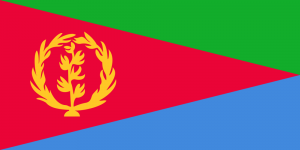 After the Referendum which brought de jure independence to Eritrea, the new government ultimately proposed a new flag which combined both the Eritrean Federal Flag and the EPLF Flag, both of which had represented Eritrea’s fight for independence. The five-pointed star of the EPLF Flag was replaced with a wreath, in the model of the Eritrean Federal Flag, but it was modified such that, “The yellow wreath symbol in the red triangle has 12 leaves on each side, with six more on the upright branch in the middle, totaling altogether to 30, which is the number of years of the armed struggle for liberation that the Eritrean people had to endure.” ((ref:1)) The current national flag of Eritrea is not just a symbol of an independent Eritrea, but embodies that concept.
Published inUncategorized